Select-5 (a.k.a. 5-tone) is a type of squelch protocol used in analogue radio communications systems, in which transmissions include a brief burst of sequential audio tones. Receivers that are set to respond to the transmitted tone sequence will open their squelch, while others will remain muted. Select-5 is a radio signalling protocol mainly in use outside the Americas and continues to be incorporated in radio equipment marketed in those countries.

The word Select-5 is often misleading as it creates the impression that selective calling can only comprise of five digits – this is not the case. The word is a historical misnomer from when radios were in fact only capable of encoding/decoding signals with five digits in them.

The transmission of a Select-5 Telegram involves the generation and sequencing of a series of predefined, audible tones. Both the tone frequencies and durations, must be known in advance by both the transmitting and the receiving radio. Each predefined tone represents a single digit. A series of tones therefore represents a series of digits that represents a number. The number encoded in a elect-5 burst is used to address one or more receiving radios. If the radio is programmed to recognize a certain number, then it will un-mute its speaker so that the transmission can be heard; an unrecognized number is ignored and therefore the receiver remains muted.[1]

A Select-5 tone set contains 16 tones that represent 16 digits. The digits correspond to the 16 hexadecimal digits, i.e. 0-9 and A-F. By default, digit "E" is reserved and used as the repeat digit and "A" is used as the group digit. There are eight, well known, Select-5 tone sets.

Each of the above tone formats have between one and three variants which allow for multiple independent signalling standards to be used on one radio system. MOTOTRBO radios which support 5-Tone signalling are able to support any one of these being able to adapt to any one of these signalling formats. Also the radios are capable of interfacing with signalling systems not listed here.

It is important to note that each of the signalling formats use tone frequencies, which are not harmonically related and fall within the range of 300 to 3000Hz. These two aspects are extremely important. If the tones were harmonically related, a distorted tone f could produce harmonics which would result in the tone being mistaken for 2f. Also the tones would not be passed correctly through standard LMR equipment if they fell outside the radios 300 to 3000 Hz pass band.[1]

Each tone in a Select-5 sequence must be unique. Typically, the receiving device cannot discriminate between two consecutive tones, where the frequency of those two tones is the same; that is, two consecutive tones with the same frequency will be decoded as a single digit. Therefore, where there are two consecutive digits to be transmitted that are the same, the second digit will be replaced by the repeat digit. The repeat digit is nearly always assigned as "E". On reception, if the receiving device decodes a sequence that contains a repeat digit, then it will substitute it with the preceding digit, thereby reconstituting the original sequence.

Each one of the tone standards have one digit (by default A) allocated to the purpose of group. Group tone allows the radio to simultaneously address a group of radios at the same time using one select-5 sequence.

In order for this to work, the originating radio (the radio from where the call is being made) must have the ability of selecting the group tone. On MOTOTRBO radios with a keypad, the group tone can be selected by pressing ٭ (asterisk). Pressing asterisk will cause the letter G to appear on the display. Secondly the destinations radios all need to be configured to expect the group tone on one or more positions in the corresponding decode sequence.[1]

The physical characteristics of the transmitted sequence of tones is tightly controlled. Each tone must be generated for a predefined period of time and in the order of tens of milliseconds. Each subsequent tone is transmitted immediately after the preceding one for the same amount of time, until the sequence is complete. Typical tone durations include 20ms, 40ms, 70ms, and 100ms.

The sequence of tones are arranged and provisioned into a radio as a Sequence. A sequence is sent as a Telegram. In Motorola two-way radios which support Select-5, a Telegram can consist of up to three Sequences.

A sequence can be defined as a sequential string of multiple tones sent without spaces between.

A sequence can consist of up to 12 hexadecimal digits. A and E are reserved and must not be used. There are also so-called variable digits and these are contained within brackets.

In MOTOTRBO radios which support Select-5, up to three sequences can be sent together for a specific purpose. For example, when making a Selective Call, the transmitting radio would send the identity of the target radio in the first sequence and then its own identity in the second sequence. This would allow the target radio to sound an alert (ring) and display the calling radio's identity.

When a radio sends a select 5 sequence or telegram, it is often referred to as a select 5 call. Sending a select 5 call from a radio will cause the radio to invoke the predetermined or user-selected sequence or call. When the receiving radio receives this, the radio will decode the sequence and either sound an alert; change the state of an accessory connector pin (if it is a mobile) and/or give an indication on the radios display (if present). Additionally, the radio could also send an acknowledgement signal (auto-ack); enter or exit stun mode or exit emergency mode.

The decoder definition in a MOTOTRBO radio can be likened to a series of switches connected in series. Each switch can only be turned by that specific tone frequency. The preceding switch also has been turned on (closed) unless it is the first tone.

In the below diagram, the sequence 12305 is sent to the radio. In order for the radio to correctly decode the sequence, it must receive 12305 as it appears here. If the sequence was sent in any other order, one or more of the switches would not close and the radio would do nothing.

If the tones were sent at different frequencies or durations, this too would have the same effect. 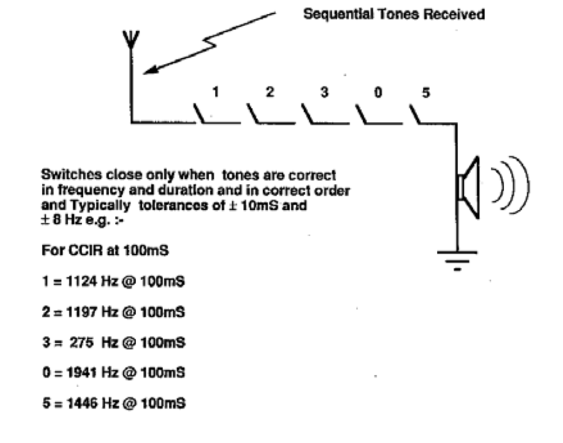 When the radio user presses or releases the PTT button, the radio will send a telegram consisting of a Sequence that contains digits that identify the radio user.

Upon receiving a Selective Call, the targeted radio can automatically send an acknowledgement confirming that the sent Telegram was received.

A Telegram can be used to end a call and re-mute the called radios speaker. This would be used at the end of a call that was set up using Selective Call.

Upon receiving a Selective Call, the targeted radio can automatically send an acknowledgement confirming that the sent Telegram was received. The targeted radio will do this, without providing any audible alert to the targeted user. This can be used to determine if a radio is turned on and on the same channel before trying to call the user.

Some radios can be configured to send a Select-5 Telegram. In addition to the Telegram, the radio can also automatically PTT allowing the user to talk or the dispatcher to hear what is going on.

This document has instructions for creating a fully functional codeplug.[2]

Although only for the old GP/GM series (Waris) radio series, the videos in this YouTube playlist may be of interest as there is some commonality between these radios and MOTOTRBO.[3]

Retrieved from "https://cwh050.mywikis.wiki/w/index.php?title=Select-5&oldid=4965"
Cookies help us deliver our services. By using our services, you agree to our use of cookies.