﻿Users, migrating from analogue to digital; can gain the benefit of two-timeslot operation without a repeater thus doubling their system capacity. It also increases the total number of users supported on a 12.5 kHz channel with no degradation in performance.

In DCDM, radios automatically and cooperatively select a Channel Timing Leader for the RF Channel (regardless of slot). This provides all radios on the same frequency with Direct Mode Channel Timing signaling communication, this signaling is communicated using the “All Site” Color Code (15).[1]

In the CPS, there is one major setting relating to DCDM: the Timing Leader Preference. There are three choices: Preferred; Eligible and Ineligible. A likely candidate for Preferred would be a base station because it doesn’t leave the channel; is connected to the mains (or a large battery) and has better coverage on simplex.

One of the radios with the higher leader preference setting (usually Preferred) is elected as the Channel Timing Leader and if that leader leaves the channel, the system selects a new leader. The Channel Timing Leader periodically announces the Channel Timeslot Structure using special Beacons (a 600ms transmission every 4,5 minutes). If the timing is accepted, it is then re-transmitted using “Forced Propagations” to the next lot of radios further away from the leader.[1] 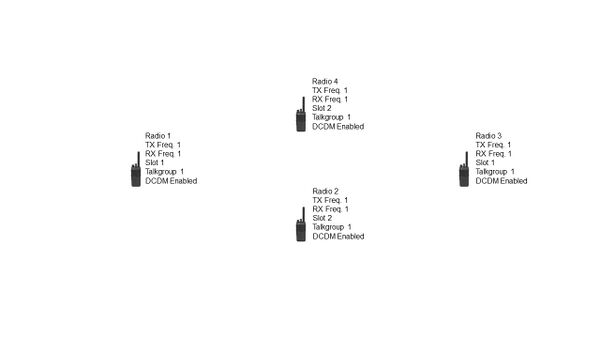 Four radios operating on simplex using DCDM. Radios 1 and 3 use slot 1 while radios 2 and 4 use slot 2.

Retrieved from "https://cwh050.mywikis.wiki/w/index.php?title=Dual_Capacity_Direct_Mode&oldid=367"
Cookies help us deliver our services. By using our services, you agree to our use of cookies.