A trunked system allows the radio terminals to share the system channels thereby allowing a large number of talk groups to communicate over a comparatively low number of radio channels which in turn effectively increases the utilization of system and allocated spectrum. Unlike Capacity Plus, Capacity Max makes use of a dedicated control channel - one TDMA timeslot per RF site.

In a control channel based system, the idle radio terminals wait on the current control channel and move to a traffic channel (sometimes called a payload channel) when there is a call of interest.

A Capacity Max system must have at least: 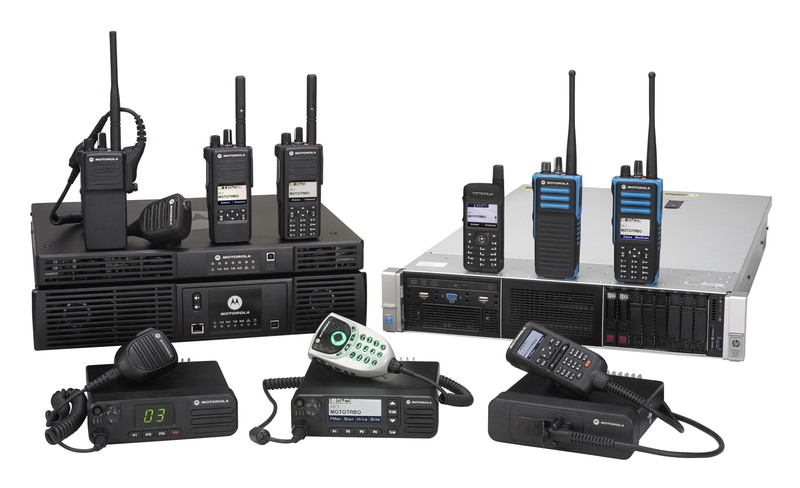 Capacity Max increases the capacity (for example, the number of calls per unit of time) of a radio system beyond what is supported by the DMR trunking protocol. To achieve this, the Capacity Max infrastructure offers the following two modes:

Other than Open System Mode and Advantage Mode, a Capacity Max radio has a third mode (Open Radio Mode), which is used by the radio when it is working in a Non-Motorola DMR Tier 3 system. In this Open Radio Mode, a radio does not use any proprietary features and will thertefore work on a system which is compliant with ETSI TS 102-361-4 v1.7.1[3] or later.

Independent operators can share frequencies in a band. The telecommunications regulators may require the channel to de-key and yield use of the channel to the co-channel users when not in use. You should access the channel asynchronously since co-operative sharing of channel is not possible in most of the cases. In this mode, the shared channel remains inactive, the repeater is de-keyed, and a radio or the system uses the shared channel politely.

Capacity Max system supports both dedicated and shared channel as a control channel.

The following combinations of the two attributes are allowed:

The candidate control channels at a site may be a mix of dedicated and shared channels. The shared control channel repeater goes to sleep, that is no transmission over the air when the following scenarios happen:

The probability of dropping a call can be reduced by configuring the repeaters:[5]

For an example, refer to the following table:

During sleep, the shared control channel repeater periodically wakes up and transmits beacons, which helps a radio in roaming to the site and also staying on the site during sleep. The beacon interval is a system-wide parameter and is configurable from 1 - 10 seconds. The beacon duration is fixed at 240 ms. A lower beacon interval reduces time to roam but it also reduces the sharing of the channel.

A MOTOTRBO repeater is capable of performing the role of a control channel continuously without increasing its failure rate (for example, failure of power amplifier). Thus, the Capacity Max system does not move the control channel periodically.

Before initiating a service at a site, a radio must acquire the control channel of the site, and be successfully registered at the site (except when the site is in Site Trunking mode). A radio registers with the system:

Initiation of Request for Services

An attempt at random access may fail under any of the following conditions:

Radio users are not required to keep the push-to-talk (PTT) button pressed during the service request process. Momentarily pressing the PTT button is sufficient.

A Capacity Max system qualifies all requests for services. On receipt of a service request from a radio, the infrastructure verifies the source and target (if any) of the request. The source (that is, the requesting radio) must satisfy all of the following conditions:

The target and the conditions that the target must satisfy depend upon the type of the service and are described in articles on specific call types.

A Capacity Max system sets up a service using “All Start” method. A Capacity Max system starts a qualified service request only when at least one trunked channel is available at all the sites that are associated with the service at that time. This method may delay the start of a service (when trunked channels are not available at one or more associated sites), but guarantees that the all the associated sites participate in the service.

The system checks the availability of channels only at the sites that are present in the system at that time. When a site is isolated from the rest of the system, the system does not include the site in the associated sites.

The Fast Start method applies to all types of group voice calls including: All Call, Broadcast Call, Emergency Call, Priority call, normal talkgroup call, and the Telephone group call. It does not apply to individual voice calls or data calls.

If a trunked channel is not available at one or more sites associated with a service request, one of the following scenarios occurs:

A Capacity Max system allows a radio user to request for preemption if required for its service request. For more details, see Allowing Request for Preemption.

A Capacity Max system allows the system owner to configure a priority for each radio and each talkgroup.

Service requests having the same priority are processed using the first-come-first-served principle.

A service request waits in the queue until all required channels become available. This has the following implications:

Some of the advantages of queuing in a loaded system are that it improves channel utilization, and a radio user is not required to press PTT multiple times. A disadvantage is that in a heavily loaded system, the recent requests have to wait for the older requests. Queing increases the delay in processing a request. In many scenarios, the delay is not desirable. For this reason, a Capacity Max system allows its system owner to disable or enable the queuing. When queuing is disabled, the system does not use priority of radios or talkgroups, and the TP_Timer could be small (around 4 seconds).

A Capacity Max system allows a call initiator that is a radio user, the option board in the SU, a non-IP peripheral connected to the SU, a dispatcher, or a data application to pre-empt an ongoing call in favor of its next service request. The system pre-empts only if there is no idle channel at the RF site. A radio user can request for pre-emption using a programmable button that moves the selection in a cyclic fashion between Normal and High. The change is applicable to user initiated call that is Voice call, Text message over trunked channel, Job Ticket, but not location or telemetry. The selection resets to its default value when the call ends.

Radio Management allows user to set/reset a flag for each talkgroup. If the flag is set then a call to a specified Talkgroup can pre-empt an ongoing call, if there is no idle channel at a RF site. Call request is queued if there is no channel with lower priority calls than the call request. Out of all the lower priority calls, the channels with the lowest priority calls are selected for pre-emption. The radio which is transmitting over the air at the selected channel is forced to stop the transmission.

Note that Emergency and All Calls are never pre-empted.

The order of priority in descending order is Emergency Calls and All Calls, Preemption Calls then Normal Calls.

A Capacity Max system allocates channels to a service request according to the system owner’s preference.

A Capacity Max system allows system owners to configure their preferences for usage of a physical trunked channel (both slots) in a repeater. The guidelines for assigning the preference level for a trunked channel are:

When a service request is selected for allocation of channels, the system assigns a trunked channel at a site according to the following rules.

Any changes in the system data do not affect the ongoing calls. To set up a call, a Capacity Max system uses several data sets such as the Subscriber Access Control (SAC) and static associations between sites and talkgroups. Any change in the data sets after the allocation of channels to a call does not affect the call. For example, during a call, if the system owner disables the source or destination of the call, the call does not stop.

A radio can enter a voice talkgroup call if it was not on the control channel at the time of call initiation. This condition may occur when the radio is at another site, out of coverage, in fade, transmitting over a revert channel, or participating in another call. A Capacity Max system supports late entry for voice talkgroup call only. The probability of having late entry for an Individual call is small because an Individual call starts after acknowledgment from the

To facilitate late entry, a site announces periodically all the ongoing voice talkgroup calls over the control channel. The announcements are more frequent (that is, late entries are approx. 50% less late) in Advantage mode than in Open System mode of a Capacity Max system. In Advantage mode, the lateness can be further shortened by approximately 50%, if the talkgroups’ IDs are less than 1024.

For radios participating in a call over trunked channels, ongoing Emergency Calls, All Calls, and calls for priority talkgroups are announced periodically over the busy trunked channels. The announcements are more frequent (that is, late entries are less late) if the emergency talkgroups IDs are less than 1024. On receiving an announcement, a radio moves to the announced call if the announced call is of interest and has higher priority than its current call.

A call is made of multiple transmissions, where the maximum time gap between two consecutive transmissions is called call hang time. A Capacity Max system allows its system owner to configure three hang times, one each for talkgroup voice call, individual voice call, and emergency voice call.

During a call, a radio accesses the trunked channel by being polite to its own color code (that is, a radio cannot talk over other radios in a call) except in case of Voice Interrupt, and during a telephone call a radio is impolite to the telephone. The radios participating in the call stay on the trunked channel during the call hang time. A radio can initiate a transmission during the call hang time. In a call involving multiple sites, radios at different sites can initiate voice transmissions near simultaneously. A Capacity Max system uses a floor arbitration algorithm, which selects one of the radios for transmission.

In some trunked radio systems, radios that need to transmit during hang time move to the control channel and request permission. The system arbitrates with any other requests received from other radios for the same call and provides a grant or reject. The disadvantage is that the request for every transmission reduces the inbound capacity (that is, the number of calls initiated per hour) of the control channel. For example, if a call has on the average 2.5 transmissions and the inbound capacity is 12000 random accesses per hour, the request for every transmission reduces the capacity to 4800 calls per hour.

A Capacity Max system allows a radio user to terminate a call.

A call is terminated if one or more of the following conditions occur:

This feature improves the channel utilization, especially in case of a long call hangtime.

Retrieved from "https://cwh050.mywikis.wiki/w/index.php?title=Capacity_Max&oldid=4985"
Cookies help us deliver our services. By using our services, you agree to our use of cookies.